He pointed as the eastern horizon. It was rowing shades of red, orange and pink, and there were clouds above us, like giant balls of cotton. There were all racing away from the east as fast as they could.

‘It’s a war zone, You’ll never make it back home. All you can do is come with us, and then one day, when things have settled down, may be you’ll be able to return.’

I am so loaded with work that I am stuck on page 140 of this book.  The last I read are the lines above that contains self explaining intriguing plot. Sliding on the snow stone is written by Andy Szpuk and is a real account of a Ukrainian boy and his family during world war II. It is a heart wrenching display of terrors of Soviet and Nazi rule on small countries like Ukraine.

I have realized that it is not only difficult to keep up with your reading habit with your work but you have to really force yourself sometimes to pursue it. Beyond that I hate the fact that the emotions you build up while going through the most rough times of your characters, suddenly sublimes once you put a pause on reading.  And then it takes a while to revive those sentiments again.  I feel it is important to bring a certain type of emotion while you are reading a book, be it loathe, but if you are not bringing that, then I am afraid you arn’t doing justice to your book.

I hope  to do justice with this one !

Okay so I am glad I found something new to post.  Teaser Tuesday is a weekly bookish meme hosted by MizB (any book lover would love this blog).  So, all are welcome to participate. Just follow these steps:

And as it is quite obvious don’t reveal too much to spoil the book for others. 🙂

Also share the title and author of the book.

“There seemed to be a similarly lax attitude concerning fornication on the slopes of Everest:even though they paid lip service to the prohibition, more than a few Sherpas made exceptions for their own behavior….”

– Into Thin Air by Jon Krakauer

P.S. Still reading it, will review the book once I am done. !

To quench my intrigue I searched the deep meaning of this philosophical quote by Anthony De Mello, a spiritual healer. It states that we are like bears pacing in a cage. Even if the cage is removed, we keep pacing in the same timid limits. We are afraid to get out. And we think that the only way out is by endless striving and thinking. Through his book The Heart of the Enlightened, Anthony guide his readers with his short stories which touch on relationships, human nature, service, spirituality, and enlightenment. 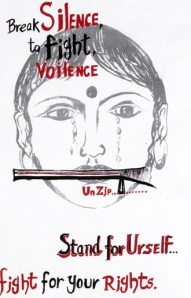 I totally gave up on writing a post today due to the lack of any inspiration around me but fortunately or unfortunately may be, I did find something. I was doing my usual writing and reading stuff in my room when I heard my mom talking to her close friend over a call about domestic violence which of course alerted my ears. So, I eavesdropped (hate to say that), but I couldn’t contain my curiosity so I asked my mother for the details and I got to know that my mother’s friend has been a victim of domestic violence and is now on anti-depressants. Last night, her husband had hit her again but this time it surpassed her tolerance level so she called the police. (But like any other respectable family the matter subdued without much tumult).  Imagine a upper middle class family which seems quite ordinary to any pair of eyes in social gatherings has a deep secret like this, what should I say they are good at camouflaging secrets?.

Domestic Violence is not a country specific issue, it is encountered everyday by number of females living in different corners of the world. I was keen on writing on this topic all the more because I am currently reading a book called My Feudal Lord which is a real account of Tehmina Durrani who was battered and tortured for many years by her husband Ghulam Mustafa Khar who happened to be the former Chief Minister and Governor of Punjab in Pakistan.  Like many women she also kept mum to such atrocities for various reasons. She eventually got divorced though.

In my belief, there is no reason (small or big) under the sun that permits you to let anybody hit you constantly, that too somebody who is supposed to provide you security. At times women may be wrong and may not oblige with the code of conduct laid by the husband, but, raising a hand on a woman or any living being for that matter in any circumstance is an act of cowardice. And I feel more angry not on the one who starts the violence but who accepts it without any attempt of refusal.  For those who suffers silently are the greatest sinners than the ones who cause the sufferings, as quoted in the Holy Book of Bhagwad Gita.

What are these women afraid of anyway? Nowadays even society is open to help them. I asked my mother to help her out, and she replied “Well I can’t until she herself is ready to rise against it.  I will be seen as somebody poking nose in somebody’s family matter.”

I certainly believe gone are the days when women were totally dependable on their husbands and crap. If you aren’t earning there is a word called ‘Alimony’ and ‘Maintenance money’ after divorce which is enough to give chills to any married men. Plus all that social stigma they go through as the battered female will receive all the sympathy of the world. Any female who has come out of this hell and made a living on her own earns my respect but not the ones who are being silent sufferers as you will always be blamed for being one. And if you really want to be a sufferer at least be a smart one, keep a pepper spray! Remember men’s private part hurts them the most. I would surely wouldn’t prefer living in such tragedy and keep an account of my beatings so that I can write a biography later on.

Break the shell and see how wonderful it is to live like a human being.

Winter and its precious things | A Little Bit of Everything….

Adventures and Misadventures in Boulder, Colorado